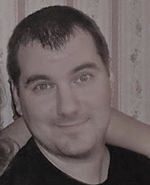 Charles David Stancil died at just 39, but he packed a lot of living into his short life. David was born November 13, 1980, in Greenville, NC. He moved to Spartanburg, SC, at the age of 8, and graduated from Boiling Springs High School in the class of 1999. Orderly, supportive, and fun loving, he lined up friends the way he lined up french fries before eating them as a small child. Dave loved his friends, and whether he was joining them for a good time or to help them shoulder a hardship, he did it whole heartedly.

After obtaining his Bachelor’s degree from East Carolina University he resolutely continued his education there in pursuit of a master’s degree in Engineering Management. Despite trusting his education to ECU, he was a steadfast Tarheel basketball fan and Gamecocks football fan.

He was the family handy man, helping out wherever needed, fixing everything from computers to cars.

David Stancil was a beloved family member and friend, and his legacy will continue in the memories we share together. A private memorial for family will be held at a later date.