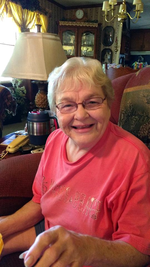 Cynthia Gore West, a devoted mother and grandmother, died on June 4, 2020, at Duke Regional
Medical Center; she was 68. Cynthia Ann Gore was born in Smithfield, North Carolina, on March 18,
1952. The daughter of the late Richard Hale and Shirley Ann Null, Cindy spent a portion of her formative
years in the Oxford Masonic Home, where she proudly graduated in 1970. She later attended business
school in Raleigh for a time before marrying her former husbands’ Nelson Broil and Joe Haskins of
Oxford and devoting her life to motherhood by raising her daughter and son.

Cindy later married Charles Linwood Hart of Oxford and northern Granville County, where she spent
the remainder of her life in the Mountain Creek community Charles introduced her to, and she loved so
dearly. Following Charles’s untimely death in 1994, Cindy later married the late W. L. West of Oxford
and enjoyed spending her days cooking and sharing her life with “Papa,” as he was affectionately known
by Cindy’s grandkids, who they adored.

Known for loquacious banter, Cindy never met a stranger and was the epitome of Southern
hospitality. Nothing pleased her more in life than cooking a hot meal with an array of deserts and an
atmosphere imbued with laughter and joy. Whether it was her daughter, son, daughter-in-law,
grandkids, or family she was blessed to love through marriage, Cindy would take a night at a dinner
table over all the gold at Fort Knox.

Cindy is survived by her daughter Brigitte E. Haskins of Henderson; son Joe Haskins, Jr. of Bangor,
Maine (Heather Haskins); grandson Peter J. Haskins and granddaughter Annie E. Haskins of Bangor,
Maine. Cindy loved her siblings, as well as their children, her precious nieces and nephews, and their
spouses. Her siblings include Sharon A. Lee (Terry R. Lee deceased) of Raleigh, as well as Karen A. Sealey
and Ric Null (Sue Null) of Clayton. Cindy is also survived by a host of friends and family she loved,
including members of the extended Null, Haskins, Hart, and West family. Undoubtedly, God gained an
angel who slipped through the celestial bounds of Heaven to touch the faces of those she loves and to
live peacefully in her eternal dwelling.

Funeral arrangements are pending and will be announced at a later date.