To share your memory on the wall of Gary Richardson, sign in using one of the following options:

Gary was an avid outdoors man his entire life. He love fishing, camping, boating and hiking. He was happiest outside, no matter the weather. He was also a loyal fan of The Boston Red Sox, The Boston Bruins, and the New England Patriots.

Left to treasure his memory are his daughter Madeline Richardson of New Hampshire, his life partner Sabrina McCoy, his lifelong best friend John Novelli of Leominster Massachusetts, and the children of his partner, who took him in as one of their own, Jeremiah Perry and his wife Melissa, Jason Perry and his wife Julie, and Hannah Gardiner.

A small memorial service will be held Saturday March 7th at 11 am at Kerr Lake State Park, Area 1 of Nutbush Campground.
Read Less

Receive notifications about information and event scheduling for Gary

Provide comfort for the family with a meaningful gesture of sympathy.

We encourage you to share your most beloved memories of Gary here, so that the family and other loved ones can always see it. You can upload cherished photographs, or share your favorite stories, and can even comment on those shared by others.

Plant a Tree in Memory of Gary
Plant a tree 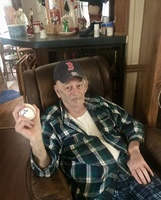