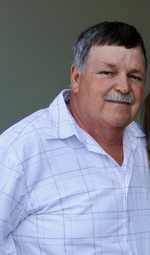 James Albert Mills, age 64, has passed away in Jacksonville, NC. on February 5, 2021. James suffered a heart attack due to a long battle with COVID-19.

James was preceded in death by his parents , brothers Thomas Mills and Ted Mills, sisters Barbara Vermillion and Brenda Mills.

He will be deeply missed and mourned by his wife Adrienne Dawn Mills, daughters Amanda Rinks (Kevin) and Tina Hubbard (Josiah). Brothers Jerry (Tina) and Larry (Dawn) Mills. He leaves behind many loved nieces and nephews.

James worked the majority of his adult life at World Color (Halls) in Dresden TN as a Five Knife operator. He was also a licensed fork lift driver and enjoyed that position at Country Dairy Delite in Nashville TN.

James was a faithful loving husband and adoring father to his two girls. Grandchildren were his hearts desire and what he lived for. If there was a child in site it was either being watched over closely or directly in his big arms.

James was a beacon of good-heartedness, he made those around him feel like family, a caring, selfless dad, his presence made the world a much better place and his memory will forever warm all of our hearts.