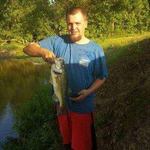 Josh was born in Wayne County on April 27, 1994 to Lee Baker Blanchard and the late Joseph Richard Blanchard "Joey".

He is proceeded in death by his brother, Aaron Blanchard; his father, Joseph Blanchard and his grandmother, Addie Davis.

Josh leaves behind his grandparents, Gene and Nancy Baker of Goldsboro, and Joe and Sue Blanchard of Bridgeport, CT.