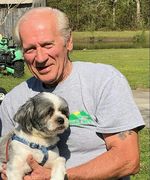 Michael (Mike) Yankow passed away peacefully on August 17, 2020 at Vident Medical Center in Greenville, NC. Mike was born on November 20, 1946 in Manhattan, NY. He was raised in the Bronx where he was a member of Saint Paul’s choir. He graduated from Power Memorial Academy and joined the Navy in 1965, serving two tours in Vietnam aboard the U.S.S. Boston.

In 1970 Mike moved to Walden, NY, where he married Sharon Dunn and started his family. He was employed at the Thruway Shopping Center and was a dedicated supporter of the Boy Scouts of America. He was Cub Master of Pack 225, and then Troop Master of Troop 225, earning numerous awards, including Scout Master of the Year. He also served on the National Camp Inspection Team.

In 1995, Mike and Sharon moved to Jacksonville, NC, buying a campground which they enjoyed for many years. In 2005 they decided to move on and went full-time RVing working in numerous campgrounds throughout the country. Mike was always a Yankees fan and was proud to have worked at Yankee Stadium as a teenager. He enjoyed spending time with his family, fishing, and working on various little projects.

In lieu of flowers, donations may be made to: Caring House; 2625 Pickett Road; Durham, NC 27705; www.caringhouse.org.