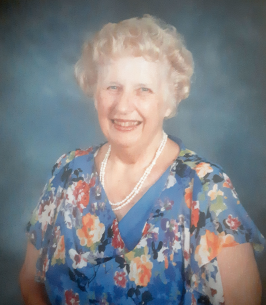 Winnifred "Winnie" Dora King, 91, of Hampstead NC passed away May 23, 2022. Winnie was born September 15, 1930 to Erwin and Else Muehler Tobey in Chicago Illinois. She had a younger brother Paul.

She was a Christian wife, mother, grandmother and great-grandmother. Her family meant everything to her. She was very active with her church; she sang joyfully in the church choir and sang duets with her husband. She was a woman of hospitality; she welcomed everyone with her loving smile and a big hug. It was hard to leave her home without playing a game.

Winnie retired from the Postal Service in Downers Grove, IL as Window Clerk Supervisor and a philatelic representative for Benjamin Franklin stamp clubs.

Winnie and Jim raised their family in Woodridge, IL then later retired to Surf City, NC.

A Celebration of Life service for Winnie is scheduled for Monday, June 27. 2022 at 1pm at The Gathering, 304 Wilmington Ave, Surf City NC